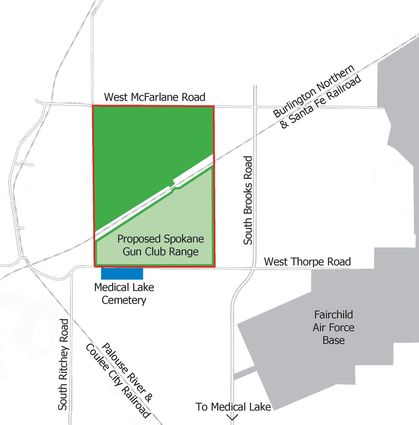 The West Plains may be getting a gun range soon if the Spokane Gun Club’s efforts work in their favor.

But not everyone is thrilled with the idea.

Located in Spokane Valley since 1892, the gun club is operating at its current location on borrowed time after selling the property to Central Valley School District in September 2018 for $4.5 million, according to county records.

The club has been looking for a replacement site since.

They settled a 451-acre site across from and immediately north of the Medical Lake Cemetery between West McFarlane and Thorpe roads, and just west of Brooks Road.

“It’s the most logical place to put our club,” club President John Cushman said in the sweltering heat of the clubs aging clubhouse.

But there’s a catch, especially for a gun club that wants to build a shooting range: the property is currently designated a no-shooting area by Spokane County.

The designation was made in late 1983 due to indiscriminant shooting — including “stray bullets” — fires and litter in the area, according to the gun club’s re-designation application to the Spokane County No Shooting Advisory Committee.

County commissioners are scheduled to take up the recommendation at a hearing at their regular Aug. 20 meeting at 2 p.m.

But the county isn’t the only entity with approval authority. Fairchild Air Force Base also has approval authority under a 2009 Joint Land-Use Study (JLUS) because the property lies within the base’s overlay zone, an area of restricted development.

Those development restrictions factored into the club’s choice of property.

“It really fits the bill,” Cushman said. “It’s not a million miles from town, it fits all the needs that we have, it’s large enough that we will be able to surround ourself and won’t need to worry about somebody moving in.”

The encroachment of Spokane Valley residential development was, in part, what forced the gun club from its current location.

The club’s original development plans included not only skeet, trap and shooting clays, but also a pistol and rifle range.

Fairchild officials were OK with skeet and a pistol range — so long as no rounds leave the range area — but balked at a rifle range, and conditioned their approval for the gun range upon removal of the rifle range from development plans.

“I get to take a look at it again once all (Spokane County review) is done,” Jeff Johnson, executive director for encroachment management at Fairchild said.

Neighbors aren’t thrilled about the prospect of a gun club next door.

Tony Whitehead lives near the intersection of Thorpe and Richey roads, just west of the proposed range.

His property is part of a larger 40-acre family legacy property that was subdivided by his parents and divvied up between he and his siblings. He decided to build on his property precisely because the area is a no-shooting zone, he said.

While he admitted the area gets its share of noise from Fairchild air traffic and trains traveling on adjacent BNSF tracks, that noise is intermittent and negligible.

He felt gunfire from the gun club would be regular and frequent.

A self-proclaimed “gun person,” Whitehead said he respects the club, but felt they were more concerned about safety, while noise was a second thought.

“It’s 800 feet away from my house,” Whitehead, who has three school-aged children, said. “It’s so close, there’s no way I won’t hear every shot.”

According to the club’s shooting petition, a ravine and trees between the proposed gun range and Whitehouse’s property “will provide a natural topographical barrier for sound that would significantly reduce impacts.”

Noise is also a concern for Janice Radmer, president of the Medical Lake Cemetery Association, who said a gun range just across Thorpe Road from the cemetery that dates back to the 1870s wasn’t a good fit for the area.

“What bothers us the most is that we have mourners out there every day,” Radmer said. “We worry about them being disturbed by the noise.”

She was also concerned about plot sales. The association has been working to improve the cemetery, which sells between two to four burials each year.

A majority of the cemetery board was opposed to the gun range, according to Radmer, who attended the Shooting Advisory Committee meeting and spoke against the range.

“They have a lot of backing, a lot of money,” Radmer said. “They have attorneys on their side and we’re kind of the underdog.”

Cushman said of noise concerns, “It’s not going to be as loud as they think.”

Krystyl Miyamoto lives about 1,000 feet southwest of the club, and behind the direction of fire, which is to the northeast.

“It’s muffled,” she said of the noise. “When there’s tournaments it’s nothing.”

Tom Cernka lives in the Country Vista Apartments about 5,000 feet northeast and downrange of the firing line. When asked he said he “likes quiet,” even as the traffic noise from nearby Interstate 90, about 1,500 feet away, droned on. The distant crack of shotguns could be heard in the distance.

“It’s not obtrusive, not a sudden noise,” Cernka said of the freeway noise compared to the gunfire.

The property for the proposed range is bisected from northeast to southwest by Burlington Northern Santa Fe tracks that carry 14 trains per day between Spokane and Wenatchee, according to BNSF spokesman Gus Melonas.

The club only plans to develop the portion of the property south of the railroad tracks, an area about 150 acres in size, Cushman said.

If county commissioners reverse the no-shooting designation, the club still needs to apply for a conditional use permit and building permits, a separate process through the Spokane County Hearing Examiner, according the Jones.

Currently owned by Western Pacific Timber LLC, the sale of the property is contingent on revision of the county no-shooting designation and the club obtaining all the necessary permitting to build the gun range, Cushman said.

In addition to the gun ranges, proposed development also includes a clubhouse and associated parking.

“It’s a future consideration,” he said, estimating it would take a year to build the new gun range once they break ground next spring.

The Spokane Gun Club is a members-only club that hosts regular American Trap Association competitions throughout the year, according to Cushman.

He estimated the club takes in about $1 million in annual sales.

“It will be a valuable community asset,” Cushman said.