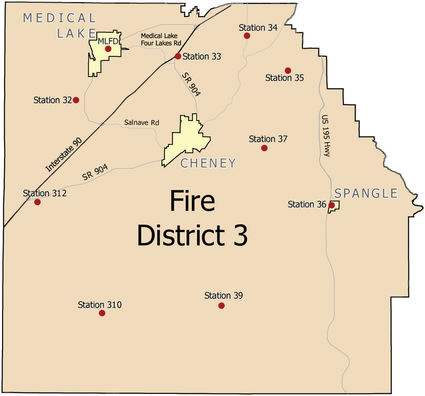 The Aug. 6 primary is next Tuesday, and among other items on the ballot, both Medical Lake and Spokane County Fire District 3 voters are being asked to consider a merger of the Medical Lake Fire Department into District 3.

If passed, emergency service calls in Medical Lake would thereafter be handled by District 3 personnel from its newly renovated Station 33 in Four Lakes, now fully staffed 24 hours per day, 365 days per year, once the election is certified by county officials.

While District 3 voters would likely not notice any changes due to the merger, Medical Lake residents would not only realize faster emergency response times, but a 100 percent response rate, according to District 3 officials.

More than 25 percent of emergency service calls went unanswered by the all-volunteer Medical Lake fire and EMS crews in 2018.

According to an agreement between the two taxing agencies, to temporarily bridge that funding gap, Medical Lake will continue to collect its EMS levy, then turn it over to the district.

The city would also pay the difference between the two levies from its general fund.

Levy rates for residents of District 3 would remain unchanged.

The agreement also stipulates that District 3 will lease the current MLFD facility for $1 per year for 50 years.

The District has publically stated it plans to invest as much as $300,000 to renovate the firehouse to bring it current with building codes. Similar to Station 33, the District plans to house firefighter and EMS personnel there 24 hours per day, 365 days per year, once renovations are completed.

Ownership to MLFD fire fighting vehicles and equipment will also be transferred to the District.

Prop 1 requires a simple majority vote for approval of the merger.

If your ballot hasn't arrived you can request a replacement ballot by contacting the Spokane County Elections office at 509-477-2320.

July 29 is the last day for online or mail-in voter registration for the Aug. 6 election. Prospective voters can still register in-person at the county elections office until Aug. 6.

Ballots must be postmarked by August 6 for your votes to be counted.