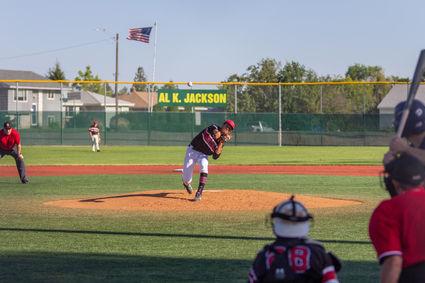 Photo by Lee Hughes Nick Swenson started on the mound for the Cannons against the Bandits in American Legion championship play, going five innings and allowing four hits and five runs while striking out six and walking five batters.

The Spokane American Legion Cannons Senior ended their season with a tough loss in the first game of loser-out league playoffs at home against the Bandits at Shadle Park Thursday, July 18.

In a back-and-forth game that was tied going into a no-hit sixth inning, the Bandits brought in two runners in the top of the seventh, which the Cannons couldn't answer despite out hitting the bandits six to five in the game.

The Cannons drew first blood, holding the Bandits scoreless in the top of the first, then bringing in two runners - one on a Bandit error - at the bottom of the inning.