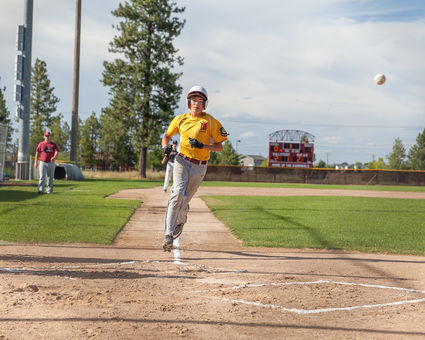 Corbin Roberts brings home a run for the Medical Lake Post 196 Cardinals during a game against Rogers on July 12. Post 196 closed the season 9-13 play in league play and 10-18 overall.

Perhaps it was a bad omen when the umpires arrived an hour late.

Whatever the reason, the American Legion AA Medical Lake Post 196 crew finished their season with a two-game make-up doubleheader at Kettle Falls that ended in a double loss.

Pitcher Denton Deal "had his worst outing of the year," head coach Jefferson French said of game one.

"He wasn't able to find the strike zone," French said. "And when he did they hit him pretty well."

The tardy officials helped Post 196 loss the second game 11-4 when it was called in the sixth inning - due to dar...