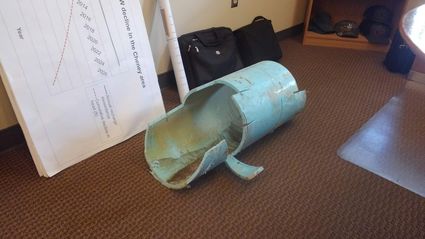 The damaged section of the 12-inch water main removed during repair work on Presley Drive.

So far, the weather has actually helped the city of Cheney's water system and its struggles with supply meeting demand created by irrigation.

"The weather pattern has been a little strange, which has helped us out," Public Works Director Todd Ableman said in a June 7 interview.

That may change, and change soon if weather forecasts prove accurate. Daytime highs are projected to climb at the end of this week and into the next, possibly running 15 degrees above average and with it bringing on residents' desires to keep their green lawns from browning up.

In the past, those factors have come earlier, forcing the city to implement water conservation measures that restrict residential and business irrigation to certain days and times. Ableman doesn't see a need to implement those just yet, buoyed partly from the way the up and down weather patterns have run this spring.

As of June 7, water levels in the city's five reservoirs were at 25.7 feet, below the desired 28 feet but acceptable. A brief period of 80 degree temperatures May 29 – June 3, with the thermometer touching 85 on June 1 and 2, led to a draw down in reservoir levels to 22-23 feet as sprinklers ran more and longer.

That has since rebounded, but not as much as Ableman and others in the water department would like to see or expect, given the more seasonal weather. With temperatures climbing into the upper 80s this week, and after a dip into the low 80s over the weekend, remaining there through next Friday or so, what water department officials will be watching is the system's ability to rebound overnight.

If the overnight drop is around a foot and the rebound is sufficient, such as the current 25.7 feet, the system is pretty much in balance. If the levels drop drastically and stay down, say 17-18 feet or below, water restrictions will be needed to restore capacity and pressure.

A concern for water officials is the static water level above the pumps in the city's eight wells, six of which are used in its potable water system. The more water above a pump the greater the hydraulic pressure created in that system, enabling the pump to work more efficiently.

As the water level above a pump - in Cheney's system that ranges from 125 feet in Well 2 to 446 feet in Well 6, according to information in its 2017 Water System Plan Infrastructure - decreases, the hydraulic pressure drops and with it the pump's pumping capacity.

When all six wells are brought online for the summer, as they are now, Cheney's startup capacity is generally around 2,300 gallons per minute. As the summer continues and gets hotter and drier, that start up capacity drops to around 1,700 gpm in August as the pumps are run almost constantly.

What Ableman said they are not seeing is a wider draw down across the system. Static levels will decrease, but eventually rebound.

"The level is there, when we pull water in (pump) the whole region goes down," Ableman said. "When we shut it off (pumps), we see it come back up."

Cheney officials are working on remedies to city water issues. One of those is a redrilled Well 3 set to go online at the end of June.

Ableman said the new well is proving to be a solid producer, and if it remains so, the city has plans to incorporate it differently than some of the other wells brought online especially for summer. Cheney may also look at deepening some of its existing wells.

Another remedy is aggressively finding and fixing leaks. A contractor recently repaired eight leaks that led to Cheney's two main pumps producing 1,065 gpm since late December instead of the usual 700 gpm.

A ninth leak was repaired on Presley Drive near the Spokane County Fire District 3 headquarters on June 4-5. A 12-inch water main was damaged and required a section to be removed and replaced.