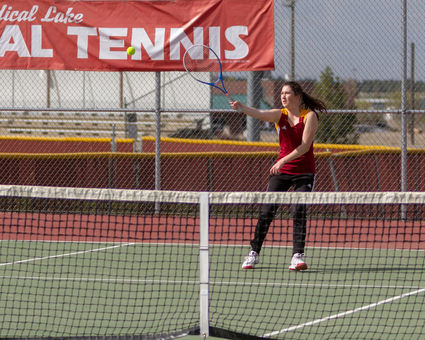 The Medical Lake girls tennis squad have gone 3-9 in Northeast 1 League play and 3-10 overall, ending up in sixth place at the end of regular season court action after three final matches.

The Card girls went 1-4 against the Grizzlies in a Tuesday, April 30 match at home, and without a full squad, according to head coach Dawn Eliassen, with the only win coming in the form of a forfeit by Newport against doubles team Suzanna Gavrilyuk and Allison Duncan.

“Every school we play is an opportunity to out the strategies we’re working on in practice into play during a match,” Eliassen said.

The following Thursday, May 2, the Cards got skunked 0-5 by the visiting Lakeside Eagles 0-4 in another NEA matchup in Medical Lake.

“Lakeside has an impressively strong team this season,” Eliassen said. “We knew going into the match that it was going to be a tough one.”

In doubles play, Grace Remendowski and Trinity Caputo lost 1-6, 0-6. Hurt-Moran and Terporten made the strongest strides falling 3-6, 3-6, while Ehr and Jenavieve Brandt went 2-6, 0-6.

The Card girls were again on the short end of the tally after they traveled north to take on the Indians, falling 1-4 in the final league match of the regular season.

In her first singles play, Remendowski was the sole win for the Cards, going 7-5, 6-4 in her match. Eliassen was impressed.

“She was instinctively choosing shot targets and keeping Colville on the run,” she said.

Remendowski was down 1-4 in the second set, but came back to win the set and the match.

“She was awesome,” Eliassen said.

In doubles play things weren’t much better. Caputo and Ehr, together for the first time in two seasons, went 1-6, 2-6.

“They had some incredible points in this match,” Eliassen said. “They played really scrappy tennis chasing balls from one side to the other.”

The top four singles and doubles from Friday’s first post-season meet move on to Regionals against B schools the following weekend, May 18.