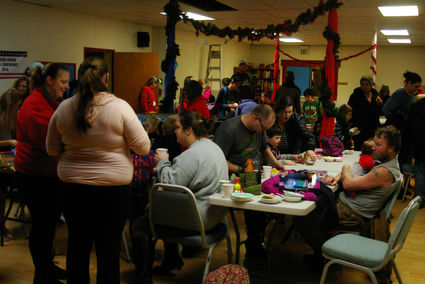 The American Legion is celebrating its 100th birthday this year, and Cheney’s Post 72 is right there with the national organization.

According to its website, the American Legion was formed in March 1919 in Paris, France by U.S. military personnel still stationed there following the armistice ending World War I in November. Cheney veterans applied for a charter in October 1919, and were granted that in November to open the post.

Originally meeting at various locations in the city, Cheney’s Post 72 acquired its current home at116 College Ave. in September 1933. American Legion Auxiliary member Margie Foland said rumors have the building serving a variety of purposes, including as a speakeasy — the reason for the small window in the front door — with an underground tunnel for smuggling alcohol during Prohibition in the 1920s.

What is known is that the building was a store at one point, and then the home of the General George Wright Women’s Relief Corps. According to a Sept. 29, 1933 article in the Cheney Free Press, the Corps deeded the building to the American Legion, and it has been their home since.

Prior to that in December 1932, Cheney’s post had been granted the authority to organize the women’s arm of the American Legion, the Auxiliary, with members meeting in homes until the post acquired the College Avenue building.

Through the years, both arms of Cheney’s American Legion have taken part in and organized a variety of community events, something Foland discovered the extent of when she found a small notebook titled “Poppy Day for Remembrance” in the basement of the building.

“I went whoa! This is a godsend (for the Legion’s history),” she said.

The book contains clippings from the Cheney Free Press through the years of American Legion activities, including the annual May Day Parade along with Christmas parties and associations with school and community groups.

Foland said the Auxiliary used to collect toys and give them to needy children in the community at Christmas, along with oranges, candy and nuts. It’s an activity the Legion still performs each year.

The Legion has had an ongoing relationship with local Boy Scout and Girl Scout Troops, along with other organizations such as Special Olympics, Cheney High School Scholarship Fund, Children’s Miracle Network, SNAP and many others. Nationally, the organization has been instrumental in the creation of Department of Veterans Affairs, creation of the U.S. Flag Code and passage of the GI Bill.

The Cheney Post is also behind the annual Memorial Day remembrance ceremony, engaging in a time-honored tradition of selling poppies and poppy buttons — all proceeds of which go to a veterans fund.

“It is marked,” Foland said of the proceeds. “It has to be for veterans.”

In commemoration of the 100th anniversary of the American Legion, the Cheney post is re-instituting a tradition from the past and combing it with a tradition of the present. While May Day parades no longer take place, Foland said the post is taking advantage of this weekend’s Mayfest celebration downtown to host an open house to reintroduce the public to the American Legion.

“It’s not through Mayfest, it’s not a part, but in conjunction with (Mayfest),” she added.

On Saturday, May 11, from 9 a.m. – 5 p.m., the Sons of the American Legion — comprised of the children of veterans — will host a barbecue of bratwurst and hamburgers along with potato salad and baked beans in front of the hall on College Avenue. Inside the hall, the public can stop by vendors who will be set up selling a variety of items such as antiques, vintage items and collectibles.

Foland said a membership table will also be set up with information about the Legion. Veterans and family members are eligible to join, and Foland hopes some will do so.

National membership in the American Legion is about 2 million veterans, with that amount exceeding 3 million when the Auxiliary and Sons organizations are included.