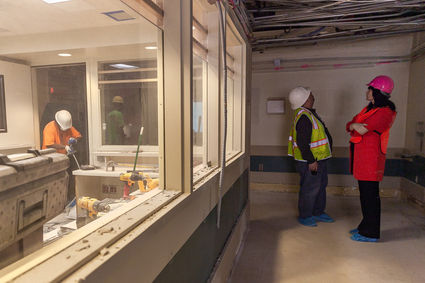 If there’s an analogy for the challenges facing the state’s mental health system, it might be found in the sweltering heat in the office of Eastern State Hospital CEO Mark Kettner. On a pleasantly cool mid-April day outside, his office is at least 80 degrees.

“There’s no central anything in this building,“ Dean Davis, director of facilities said of the building’s antiquated steam heating system.

The focus is instead on a $6.7 million capital improvement project currently underway that will add 50 beds at Eastern, increasing its capacity to 367 patients, according to Joey Frost, director of organizational development and communications.

The driving force behind the remodel is the outcome of a 2015 federal class action lawsuit. In Trueblood v. Washington State, the court found the constitutional rights of thousands of people awaiting trial were being violated as they languished in local county lockups awaiting court-mandated mental health competency evaluations and restorative services.

Some spent more time in jail awaiting evaluations — often in solitary confinement without access to mental health services — than if they’d simply been convicted and sentenced for their crimes, according to Disability Rights Washington, a non-profit advocacy organization serving the roughly 900,000 people with disabilities in the state.

The court ordered the state Department of Social and Health Services to transfer and psychologically evaluate people facing charges within seven to 14 days after a judge determined the need for competency or other mental health evaluations.

But that didn’t happen. By 2018, after DSHS paid millions in contempt fines for failing to comply with terms of the lawsuit, the court agreed to a settlement in which the state would make phased changes to its mental health system during a four-year period ending in 2023.

The settlement also created a monitoring system to ensure the court-mandated work is accomplished.

Eastern’s additional beds and other efforts at the facility are part of the first phase of the settlement that began this year which includes hiring 120 new staff members, according to Kettner.

“Those 50 beds are going to require a lot of additional support,” he said.

The hospital accepts incarcerated patients from 20 different county jails in Eastern Washington. It also accepts overflow from places like King and Pierce counties, and Western State Hospital. About 30 people are currently waiting for admission to Eastern, Kettner said.

The evicted staff has consolidated elsewhere in the hospital, Davis said.

Established in 1891, the hospital supports three types of psychiatric patients. About one quarter are forensic patients — accused or convicted criminals the court has determined require psychiatric evaluation or other treatment, according to the DSHS website. Another quarter are severely mentally ill adult patients being treated under a civil court order. About half are geriatric —people 50 years of age or older, or younger patients requiring direct medical care who are housed with them.

Many are patients who require shorter-term extended care — from 90 to 180 days, Kettner said.

“We work to get them back on track and discharged,” he said.

The hospital rotates roughly 600 psychiatric patients in and out annually, according to the DSHS website.

Design for the ward remodel projects began in September 2018. Actual construction started last month. Completion is expected by next spring.

There are other projects happening as well, including an ongoing $1 million patient bathroom remodel to bring 12 bathrooms up to current patient safety code. Another $1 million project will replace old carpeting with a more durable tile system on patient wards in the facility.

And approximately $900,000 is being spent on ongoing patient safety improvements that minimize ligature risks — where patient can tie a rope or cord to something to injure themselves — including beds, fire doors, handrail replacements, and even secure drop ceiling tiles.

Psychiatric patients are adept at finding creative methods of hurting themselves, and the staff is constantly trying to stay one step ahead of their charges, Davis explained.

But some things cannot be made ligature-free. To mitigate patient risk, members of the 900-person staff at Eastern conduct a walk-through of each ward; check on each patient, doors, bathrooms, and everything else, once every 15 minutes.

Eastern is accredited by the Joint Commission, an independent, national non-profit health care accrediting organization, and certified by the federal Centers for Medicare and Medicaid Services, according to the DSHS website.

Although Eastern is not required to have accreditation, it adds credibility and shows “that you really meet high standards for patient safety and for staff safety,” Frost said.

Safety is “all-encompassing and intertwined,” according to Kettner, and patient and staff safety are not necessarily exclusive, but instead go hand-in-hand.

“It’s hard to know where one stops and the other one starts,” Kettner said. “Obviously we don’t want staff to get hurt. At the same time we don’t want patients to get hurt from something that the staff did wrong.”

Staff goes through extensive training before they are allowed on the ward floor, Frost said.

There were 37 patient-to-staff attacks reported to the Department of Labor and Industries in 2018, according Kelley Stowe, media relations manager for DSHS. Of those, 26 were approved by L&I.

Stowe emphasized that a physical attack can include spitting or hair pulling that doesn’t result in injury.

As the outsourced law enforcement agencyf or the City of Medical Lake, Spokane County Sheriff’s deputies respond to calls at the facility for a variety of reasons, including assault.

In 2017, the Sheriff’s Office responded to 3,168 calls within the city limits of Medical Lake. Of those, 217 were to the hospital’s address, according to Cpl. Mark Gregory, Spokane County Sherriff’s Office public information officer.

He emphasized that those were for all calls — from assaults to traffic stops.

Eastern was established in 1891, according to the DSHS website, and has a budget of $92 million for fiscal year 2019 that ends in June, according to Kettner.

And Kettner’s office heat? He’ll have to wait awhile for it to be fixed, according to Davis. Built in 1889, the hospital’s steam plant is one of the oldest buildings on the campus and is slated for replacement. Although a preliminary design has been approved, officials are waiting on funding for full design of what Davis estimated would be a $20 million project.