ML baseball eke out a win on the road 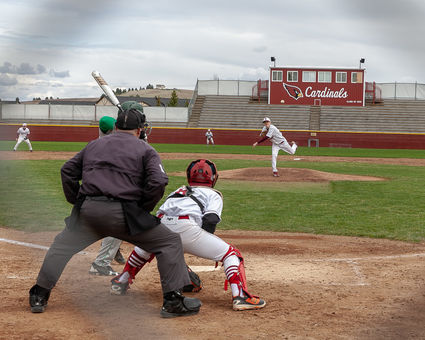 The Medical Lake boys of spring notched another win, going 2 for 4 with a win against Newport on the road.

Medical Lake went north on Tuesday, April 16 to receive a thrashing in a an 11-1 loss to the Lakeside Eagles.

“The plan was to pressure them because they are a really young team,” Sharp said. “But they made the plays, and their pitcher was great.”

Medical Lake managed their single run off four hits in 22 at-bats — 13 of them strikeouts.

“They have a lefty that pitches inside,” Sharp said.

Sam Gollehon was on the hill, pitching five innings with eight hits, four walks and seven strikeouts. He was relieved in the sixth inning by closer Weston Thomas, who allowed four earned runs on as many hits, and two walks.

“They didn’t swing at any bad pitches,” Sharp said.

It was a romp for Medical Lake when they gave Newport a 12-1 stomp-down on the road on Friday, April 19 in their second season win against the Grizzlies.

Brent Keith, who is currently leading the team hitting at .360, got the win on the mound, pitching all five innings, allowing only one walk and a single run off two hits in 16 Grizzly at-bats, while throwing seven strikeouts. Sharp was effusive.

“He did awesome,” Sharp said. “He pitched a complete game.”

The Cards were relentless and consistent on both offense and defense, scoring one run each in the first and second innings while backing up Keith on the mound with solid defense.

“At the plate we just kind of finally opened up” Sharp said, noting the Cards had been hitting the ball early in the season with “no good results,” and their bats had gone dry for several games.

The effort seemed to fatigue the Grizzlies defense. While they managed to score their single game run in the fourth inning, the Cards brought in three more runners, making the score 5-1 going into the fifth.

And that’s when the Cardinals began their slugfest, bringing in seven runs to seal the deal and keeping the Grizzlies off home plate to end the game.

It was a team effort offensively for Medical Lake, with 12 runs off 14 hits and 27 at-bats. Mason Hammond scored two hits, one run and three RBIs on four at-bats, including a triple. Joe Griffey had a double, and scored twice on three hits, and brought in three runners on three RBIs on for at-bats.

The Cards rode the victory wave the following day when they turned the tables against visiting Lakeside on Saturday, April 20, in a hard-fought grudge game four days after their Tuesday loss to the Eagles at home. It was a 4-3 defensive victory mainly due to solid pitching.

Ben Soliday was hot on the mound, going five innings without a single run off three hits.

“He did an awesome job,” Sharp said.

Gollehon was on the hill in relief. He allowed three runs, two earned, with a single strikeout, before being relieved by Thomas in the seventh. Thomas closed the game decisively for the Cards, allowing no hits, and only a single walk in 19 pitches with three strikeouts.

The Cards were light on the offense until the third, when they scored a single run for a 1-0 score. Lakeside scored a single run in the top of the sixth, which the Cards answered with a two RBI smasher by Gollehon in the bottom of the inning for a 3-1 game.

With Gollehon on the mound in the top of the seventh, he walked four batters in a row, and Lakeside managed to score one run before Sharp relieved him.

Sharp brought in closer Thomas, who walked one runner and allowed a second run to make the plate, for a tie game. But he also threw three strikeouts, Sharp noted.

Again, the Cards came back, led by Keith with a base hit. The next batter was hit by a pitch. With one out and runners on first and second, the next hitter grounded what could should have been a double play ball. Lakeside got the out at second, but an error at first allowed Keith to bring in the winning run.

“It was a big win for us,” Sharp said. “We haven’t won a whole lot of close games this year. For the kids to find a way to win that, that was huge.”

At home on Monday, April 22, the Cards went up against the Chewelah Cougars, who pasted them 11-4 in seven innings, capitalizing on 34 at-bats in non-league play.

“We started a lot of younger guys due to injuries,” Sharp said.

Griffey started on the mound, but didn’t finish the first inning after allowing four runs on two hits and a walk with a single strikeout.

Jack Meade, brought up from the JV squad, replaced in relief, throwing 105 pitches in just over four innings, allowing seven runs on 12 hits and two walked bases with five strikeouts. Eugene Haas closed out the game with no runs or hits, and no walks.

At the plate the Cards had five hits on 25 at-bats and three RBIs, but struggled with 12 strikeouts, and left six runners stranded.

“They’ve got pitching, they’ve got a lot of stuff going on,” he said. “We played with them well in the first few innings, then they hit the ball well.”

Especially starting in the fourth inning, when they scored seven of their 11 runs. Still, Sharp had good things to say about his pitching in the game.

“Jack did an awesome job,” Sharp said. “He competed out there. I think he has a bright future. He does something you can’t teach kids to do on the mound.”

Things like manipulating the batters and other “funky” stuff, Sharp said.

“We hit the ball a little bit, but we faced good pitching,” Sharp said. “I asked for one more run to finish the game and they got me one more run. They finished it out.”

As of press time the Cards were at 3-6 in NEA play, and 3-12 overall, putting them in fifth place in the NEA. Three of their next four games are on the road against the teams with whom they share the bottom of league standings. They face Northwest Christian Tuesday, April 23 in a non-league game, then Riverside on Friday, April 26, followed by 12-0 Colville Saturday. They close out the regular season at Deer Park (9-3) on Tuesday, April 30.