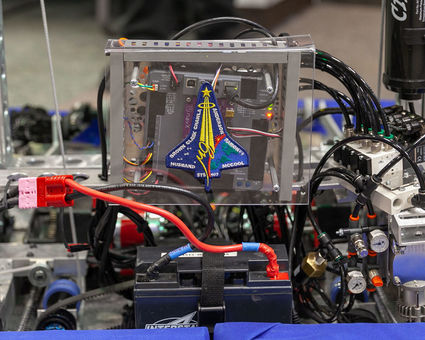 The Circuit Breakers robot was named Anderson, a tribute to local hero Lt. Col. Michael P. Anderson, who died along with his six fellow crew members aboard the space shuttle Columbia when it disintegrated during re-entry on Feb. 1, 2003. The team has been in contact with Anderson's widow, who has been tracking the Breaker's progress, according to team mentor Naomi Moody, and will be meeting her in Houston.

Against all odds, they've done it again.

"It's the frosting on the competition cake in FIRST robotics," Naomi Moody, team mentor, parent of Circuit Breaker team member Rylie Moody, and unofficial spokesperson for the group said.

The competition in For Inspiration and Recognition of Science and Technology, or FIRST, is incredibly tough - global, in fact. Only the dedicated need apply.

"It's a year-long commitment," six-year Circuit B...