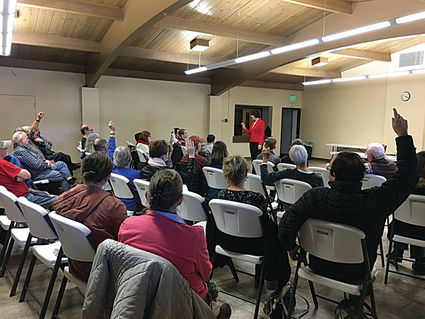 At Rep. Cathy McMorris Rodgers’ Feb. 21 town hall in Medical Lake, no topic was off the table, with attendee questions ranging from her stance on deportation and the national debt to her own recent campaign contributions.

Republican McMorris Rodgers, U.S. Representative for Washington’s 5th Congressional District, kicked off the meeting by highlighting her political record, referencing several bills she sponsored that have passed into law before taking constituent questions.

Several audience questions centered around President Trump’s recent declaration of a national emergency to build a wall on the U.S. southern border. McMorris Rodgers said she was supportive of the wall and border security and that in some cases the U.S. “absolutely should deport,” but expressed concern about the sudden declaration.

“I have fundamental concerns about the president acting unilaterally about that through executive order,” she said.

It was a meeting that was planned in haste, with Medical Lake City Administrator Doug Ross finding out about the town hall the same week it was set to take place. McMorris Rodgers’ communications director Jared Powell said the visit was short-notice due to a government shutdown meeting potentially impacting the congresswoman’s schedule.

At the town hall, which was attended by about 30 people, McMorris Rodgers said she was excited that Fairchild Air Force Base is expanding and is in talks with them and the city of Airway Heights about the recent water supply contamination.

But the most contentious part of the afternoon came when Spokane resident Graham Brown brought forth a folder full of contribution data from the congresswoman’s most recent campaign.

Brown asked McMorris Rodgers about some of those records, including why she received more than $30,000 from telecommunications companies over the course of 2017-2018 following a key net neutrality vote.

Federal Elections Commission data indicates that McMorris Rodgers did receive at least $37,000 from various communications groups last year, including AT&T, Comcast and Verizon, not including at least $24,000 from internet giants Amazon, Google and Microsoft.

A spokesperson for McMorris Rodgers later clarified her comments, saying she was responding to Brown’s suggestion that contributions affected her actions in Congress, not disputing the contribution amount.

In the meeting, McMorris Rodgers said her votes were not influenced by campaign donations.

Brown also asked why the majority of McMorris Rodgers’ recent campaign contributions came from out of state. McMorris Rodgers said that representation of the data was “not accurate,” and said that out of nearly 24,000 individuals who have donated to her campaigns, nearly 90 percent are from Washington state.

Data from the Center for Responsive Politics, a non-partisan, independent nonprofit and research group tracking money in U.S. politics, indicated that 57 percent of McMorris Rodger’s total funding in 2017 and 2018 was contributed from donors in Washington, while nearly 43 percent came from out of state.

Powell later said the 90 percent figure she cited referred to the source of individual contributions, not those provided by PACS and large corporations.

The Cheney Free Press performed a small random sample of more than 400 individual contributions between 2017 and 2018 and found about 41 percent of them were from Washington; however, McMorris Rodgers received more than 6,500 contributions from private citizens alone last year.

Brown said he brought the questions forward because he believes “political elections should not be decided by money but by voters,” and felt that the congresswoman “avoided the questions completely.”

“These meetings in small areas in the middle of the day with last-second notice limit the number of working, voting people that can attend,” Brown said.

“Given the deck of cards they’re dealt, I think she’s doing a pretty dag-gone good job,” he said. “But the system is totally broken, both Republican and Democrat.”

As the hour-long meeting wound to a close, West Plains residents sought McMorris Rodgers’ take on the national debt, which as of 12:10 p.m. on Tuesday, Feb. 26 was up to more than $22.059 trillion, according to the U.S. National Debt Clock.

McMorris Rodgers said that if the United States’ national debt interest increases by 1 percent, the country will be spending more annually on its debt than on its military — which, according to non-partisan economic organization The Peter G. Peterson Foundation, hit $617 billion in 2017.

She also said debt has historically led to failures in other countries and directed attendees to “look at England — they were the leaders and now look at where they’re at in the world.”

Multiple audience members, including a military veteran struggling to pay medical bills due to bureaucratic red tape, said they had approached McMorris Rodgers’ office in the past and received no response. McMorris Rodgers told them to leave their numbers with her aides and she would do her best to address their issues.