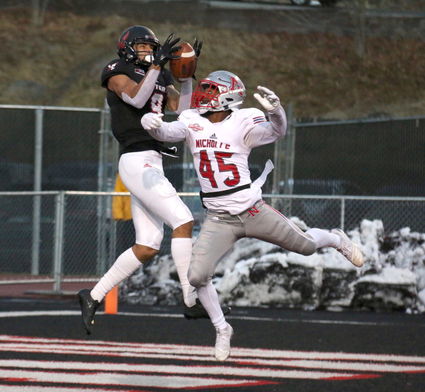 Dylan Ledbetter’s finger popped the filling balloon of Nicholls State last Saturday and the air gushed out of the Colonels.

With his team trailing 14-3 and hoping not to be further behind as the first half came to a close, Ledbetter got his hand —perhaps just a finger — on an attempted 37-yard field goal by Lorran Fonseca.

Whatever, it was just enough to send the ball caroming onto the red turf where it was first bobbled by Nzuzi Webster and finally scooped up by Kedrick Johnson. He raced 55 yards down the Eastern Washington sideline for a touchdown as time expired, closing it to a 14-10 game.

The Colonels never recovered as Eastern went on to score the next 32 points on the way to a 42-21 quarterfinal Football Championship Subdivision playoff game win at Roos Field before 5,250 fans who gathered in mid-30-degree temperatures.

The Eagles advance to the round of eight, a rematch against Big Sky co-champ UC Davis, Saturday at Roos Field at 1 p.m.

“It was big, it was a big momentum swing,” Nicholls State head coach Tim Rebowe said. “If you don’t make the kick, it’s still 14-3 and you get the ball back to start the second half, but when it’s blocked and returned it’s 14-10 and we couldn’t get the momentum back to start the second half. They made a good play and it bounced the right way and it happens sometimes.”

In what has become routine, Eastern started slow, but finished fast.

“It’s incredible,” EWU head coach Aaron Best said of the victory — his first as a head coach but 15th playoff win as an Eagle. “We have a lot of grit and resilience — that’s who we are at Eastern. You can hang around about 40 seconds and you’ll understand.”

And if the shock of the final moments of the second quarter were not enough, linebacker Ketner Kupp capped it with a 95-yard interception return for a touchdown.

Kupp jumped the route of the Colonels receiver as the visitors were deep in Eagles territory and gobbled up a short Chase Fourcade pass and was off down the sidelines in front of the shocked Nicholls bench.

The return ranks second in school history, the only return longer a 96-yarder Maurice Perigo versus Southwest Texas State on Sept. 21, 1996.

Other notable efforts came on both sides of the ball.

Senior running back Sam McPherson had 137 rushing yards and two touchdowns against the Colonels, giving him five 100-yard performances in his career and four this season. He now has 1,145 yards this season, moving into 10th in single season school history.

In the eighth start of his career and seventh this season, junior Eric Barriere accounted for 216 yards of offense. He was 17-of-29 passing for 162 yards and a touchdown and added 54 yards on the ground. He is now 7-1 as a starter, including 6-1 this season as an injury replacement for the injured Gage Gubrud.

Redshirt freshman Andrew Boston had a career-high 89 yards on five receptions with a touchdown.

And Kupp had his seventh career double-figure tackling game, equaling his career high with 12. Sophomore linebacker Chris Ojoh made the sixth start of his career and had a career-high 11 tackles.

Paul Delaney can be reached at pdelaney@cheneyfreepress.com.