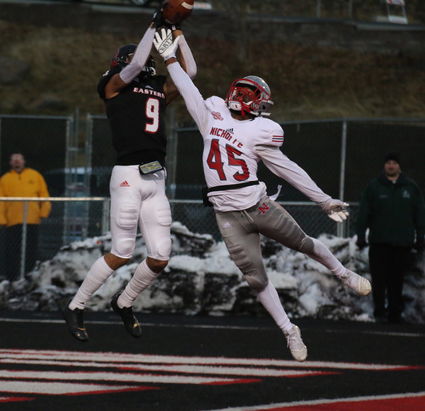 Dylan Ledbetter's finger popped the filling balloon of Nicholls State last Saturday and the air gushed out of the Colonels.

With his team trailing 14-3 and hoping not to be further behind as the first half came to a close, Ledbetter got his hand -perhaps just a finger - on an attempted 37-yard field goal by Lorran Fonseca.

Whatever, it was just enough to send the ball caroming onto the red turf where it was first bobbled by Nzuzi Webster and finally scooped up by Kedrick Johnson. He raced 55 yards down the Eastern Washington sideline for a touchdown as time expired, closing it to a 14-10 game.

The Colonels never recovered as Eastern went on to score the next 32 points on the way to a 42-21 quarterfinal Football Championship Subdivision playoff game win at Roos Field before 5,250 fans who gathered in mid-30-degree temperatures.