Airway Heights' splash pad is still not on 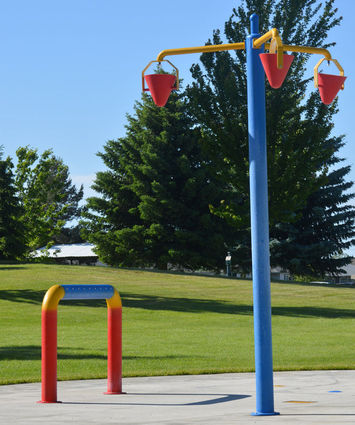 The Spokane County Health District needs to approve Airway Heights' splash pad's plan review before the city can operate it.

Normally during the summer, the Airway Heights' splash pad in Sunset Park would be operating and children would be playing on it.

However, there have been a couple situations has kept the city from operating the water feature at this time.

The first was the recent water crisis where the city enacted water restrictions advising residents and businesses not to use Airway Heights water for consumption from May 16 to June 8. Staff did not operate the splash pad as a cautionary measure because it uses potable water that goes through a gravity drain system and delivers it to the city's sewer system.

During that time, the Spokane Regional Health District (SRHD), which had been assisting Airway Heights during the water crisis, noticed the water feature and asked city staff why they did not have a pool permit for it.

J.C. Kennedy, parks, recreation and community services director explained he never sent permit filings because he thought the splash pad did not fit Revised Code of Washington's definition of a pool or a recreation water contact facility.

According to RCW chapter 70.90.110, a recreation water contact facility "means an artificial water associated water facility with design and operational features that provide patron recreational activity, which is different from a conventional swimming pool and purposefully involves immersion of the body partially or totally in the water, including water slides, wave pools and water lagoons."

"The only time when it was considered a pool was when some of our city's finest had to dig up the concrete and remove some sod and water was everywhere," Kennedy said.

The city installed the water feature in 2014. It was a joint effort between Airway Heights and the Rotary Club of Spokane West. The Rotary Club spent over a year raising funds to purchase the equipment, saving the city $169,000 in supplies, construction and installation costs. WM Winkler Company completed construction on the project.

Kennedy completed a swimming pool permit and sent it to the health district. He also went to WM Winkler to get the plan review and schematics for the splash pad. The plan review lists that the splash pad is 43 feet six inches in length and 35-03 in width with a zero average depth.

Kennedy said the worst case scenario is the city would have to hook up the splash pad drain to the sewer system. In order for staff to operate the splash pad, the health district needs to approval the feature's plan review.

"It's kind of a hurry up and wait at this point," Kennedy said.

Al Stover can be reached at al@cheneyfreepress.com.