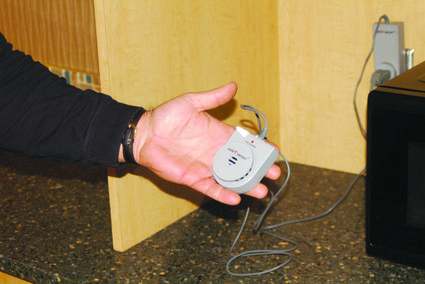 Cheney Battalion Chief Ken Johnson holds part of a Safe T Sensor installed on a microwave in the community room on Pearce Hall's second floor. Johnson holds the end of the sensor that magnetically attaches near the microwave's vents, with the unit's power cord plugged into the other end that is installed on the electrical wall socket behind.

That solution boiled down to something as simple as a $50 switch.

Cheney Battalion Chief Ken Johnson said the department routinely responds to fire alarm calls at the university's eight residence halls, only to find the alarm stemmed from smoke generated by a student misusing one of the microwave units located on each floor. Johnson said this typically happens when a student atte...