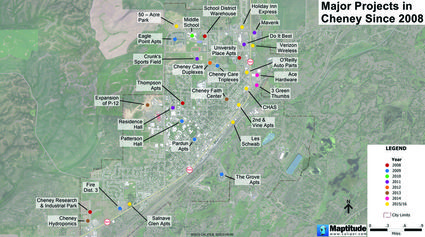 The map above shows locations of the 28 major projects completed in Cheney since 2008, including projects so far in 2016.

Cheney's Planning Commission received an overview of economic development activities and conditions - past, present and future - at their final meeting of the summer, July 11.

In a presentation to the commission, city planner Brett Lucas explained that Cheney has rebounded significantly in the number of building permits issued over the past two years. After a high of around 330 in 2009, permits steadily declined, finally bottoming out in 2012-2013 at just fewer than 200 each year.