Milt Priggee's version of a "selfie."

To those who have lived in the area for any length of time, and who might have been readers of Spokane newspapers in the late 1980s and through the 1990s, you may notice the Cheney Free Press recently reintroduced the work of Milt Priggee to the editorial pages.

Priggee was both loved and hated in his time in Spokane, so much so that his bosses created bumper stickers readers could display to show on which side they stood.

They carried the messages, "I, (the shape of a heart), Priggee," as well as the other version with the circle and slash through the heart for those who did not agree with his work. They were given away for free to whomever asked for them, Priggee said.

"What was going on was (Spokesman Review editor) Chris Peck wanted a cartoonist that created a community buzz," Priggee explained. "I guaranteed him, 'I'm your guy.'"

The controversial editorial cartoonist, who worked in Spokane between 1986 and 2000, now resides on Whidbey Island in the Puget Sound and is a freelance syndicated cartoonist and illustrator.

His work has appeared everywhere from the state's largest daily newspapers such as the Seattle Times and Tacoma News Tribune, to a wide variety of Washington state weeklies like the Colville Statesman Examiner where Cheney Free Press staff first rediscovered his work.

"It's nice that we have a cartoonist who is well known and unique," Free Press publisher, Harlan Shellabarger said.

When he was hired in Spokane, Priggee replaced the retiring Shaw McCutcheon, who for decades drew national, regional and local cartoons. Now very few papers have a staff editorial cartoonist and choose to select from a wide range of syndicated work that can relate to readers of a variety of ideologies.

As with all editorial cartoonists, Priggee's style is unique, but so is the end product. He crafts work that is both national, and specific to the state of Washington.

"I can't get too local because of the economics of the situation, but I can provide something that a newspaper can't get from any other source," Priggee said.

What inspires his work?

"How do you turn on the passion to verbally express your personal protest?" Priggee said. "First off you gotta' be informed, and read the stories in the news. That's where the ideas rest; you gotta' read, read, read, read."

Recent fodder has come from Olympia and Gov. Jay Inslee, the Legislature and budget battle.

Priggee has to dive beneath the headline.

"There's many layers to the onion and you have to completely peel the onion down until you find the core," Priggee explained. Once that is done the inspiration of right or wrong flips on the light switch. "That's the work, the drawing is the easy part."

Born in Anchorage, Alaska at Elmendorf Air Force Base, but raised in the suburbs of Chicago, Priggee came by art naturally as his father, Milton, was an art director for an advertising agency. "I grew up seeing stuff come out of his pen," Priggee said.

Milton Priggee entertained his son after coming home from work with his drawing talent. But one day, "He gave me a pencil and paper and said, 'Hey entertain yourself, start drawing.'"

In junior high and high school Priggee was drawing cartoons all the time and getting them in the school paper. "People knew me as the cartoonist for the paper," Priggee said.

He went to a local community college and then to Adams State College in Alamosa, Colo., graduating in 1976.

Priggee returned to Chicago where he freelanced for the Chicago Daily News until it closed. His work also appeared in the Chicago Sun Times, the Chicago Tribune, Chicago Magazine and he later worked fulltime with the Journal Herald in Dayton, Ohio. Four years later it, too, closed.

Next stop was Spokane where not only did he ruffle plenty of feathers but he takes pride in helping change some of the thinking, too.

"They had no idea what an editorial cartoonist is or does, how he relates to the community, what he's supposed to do," Priggee said. McCutcheon, a second-generation cartoonist drew much like his father had at the Chicago Tribune for 40 years.

Spokane is a wonderful place for a cartoonist, mainly because there is a huge political right-leaning population, buoyed by similarly-sized liberal element, Priggee said. "They meet in Spokane right about Riverside (Avenue). The left and the right are very passionate." 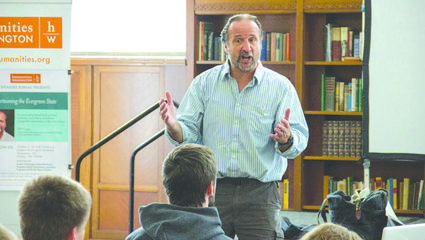 Milt Priggee speaks to a group of students about his craft as an editorial cartoonist.

His out-of-the-box penned commentaries drew both ire and interest from other media who wanted to peek inside Priggee's head to see what made him tick.

But talking to competitors of the paper was taboo at the time - something that made Priggee really scratch his head.

Priggee received his first request for an interview about two weeks into his SR gig. When he presented the request to editors as "proof he could create a buzz," Priggee was told he was prohibited from partaking in such activities.

He eventually made his case that it was a good idea for competing media to spend their money promoting the newspaper with which he worked. To make a long story short, there is no longer such a ban, Priggee said. "I broke the ice, smashed it and melted it."

Paul Delaney can be reached at pdelaney@cheneyfreepress.com.